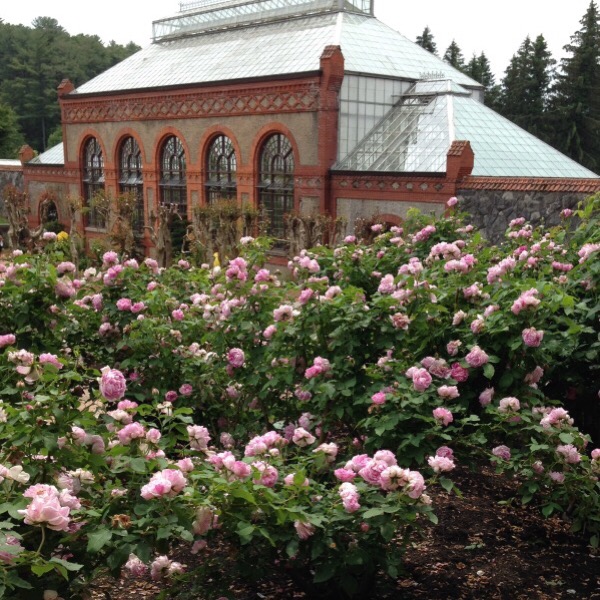 Since 2011, Biltmore’s Rose Garden has been home to the Biltmore Rose Trails, created by Paul Zimmerman who wrote the rules, finds the entrants and now runs the trials with the help of the wonderful folks at Biltmore. “My official title regarding the Trials is Coordinator Of The Biltmore International Rose Trials,” says Paul Zimmerman when I interviewed him for, the article called, “Roses Are Plants Too”. More than 90 varieties of roses from growers and breeders worldwide have been planted and cared for by Biltmore’s expert horticulturalists now under the direction of Rosarian Jonathon Palmer. Each trial lasts two years and a permanent jury judges the roses four times per year. One of the permanent judges we are quite fond of and familiar with that makes the trek to the garden to judge 4 times a year is Lynn Hunt author of the Dirt Diaries and her husband Chris Hunt. We are so appreciative of this tremendous commitment the permanent jury makes. We make the trip once a year and are honored to do it. This year’s competition, this week-end Saturday, September 23, 2017 the international and permanent juries will conduct the final round of judging for the trial group of 29 roses planted in 2015.

Director of Biltmore Wine Club, Jeff Plack Jplack@biltmore.com and others from the wine club, will be joining us for the perfect pairing for wine and roses at the reception the evening before the judging this Saturday, September 23rd. We look forward to meeting the Biltmore Wine Club. This is a group of us with current President of the American Rose Society, Pat Shanley

The Biltmore’s Rose Garden, home of the world famous Biltmore International Rose Trials and host to rose breeders and rosarians from Canada, the U.S., France, Ireland, Great Britain, and Germany was awarded the prestigious World Federation of Rose Societies (WFRS) ‘Award of Garden Excellence’ on Friday, September 24th in Biltmore’s Rose Garden. On hand to receive the award from Past President of the American Rose Society (ARS) and current Vice President for North America World Federation Of Rose Societies (WFRS), Jolene Adams was Parker Andes, and Biltmore’s director of horticulture and Emily Tice Wilson, Biltmore’s former rosarian as well as this year’s & last year’s Biltmore International Rose Trials judges and sponsors of the event Witherspoon Roses, Mr. & Mrs. David Pike, and Mills Magic Rose Fertilizer, Mr. & Mrs. John Beaty. This highly sought after and prestigious ‘Award of Garden Excellence’ for the best rose gardens in the world was established to improve the public’s knowledge in all matters concerning roses.

“Biltmore’s historic Rose Garden is the perfect setting for trials,” said Parker Andes, Biltmore’s Director and trials manager. “We’ve enjoyed introducing these new varieties to our guests as they stroll through the gardens. It has been an educational experience, and it complements the work we do to care for Biltmore’s collection of old garden and modern roses.”

The trials are a valuable way for the home gardener to learn what roses do well and what may be potential candidates for their own gardens. Trials of this type are open to rose breeders around the world – from professional to beginner. New rose varieties will be planted for trial each May. They are evaluated for overall health and rigor; fragrance; disease resistance; and ability to repeat bloom.

Guests visiting Biltmore’s gardens may view the roses currently on trial in borders in the Walled Garden and areas near the Rose Garden. Peak blooming time in Biltmore’s rose garden occurs typically in mid-May and September.