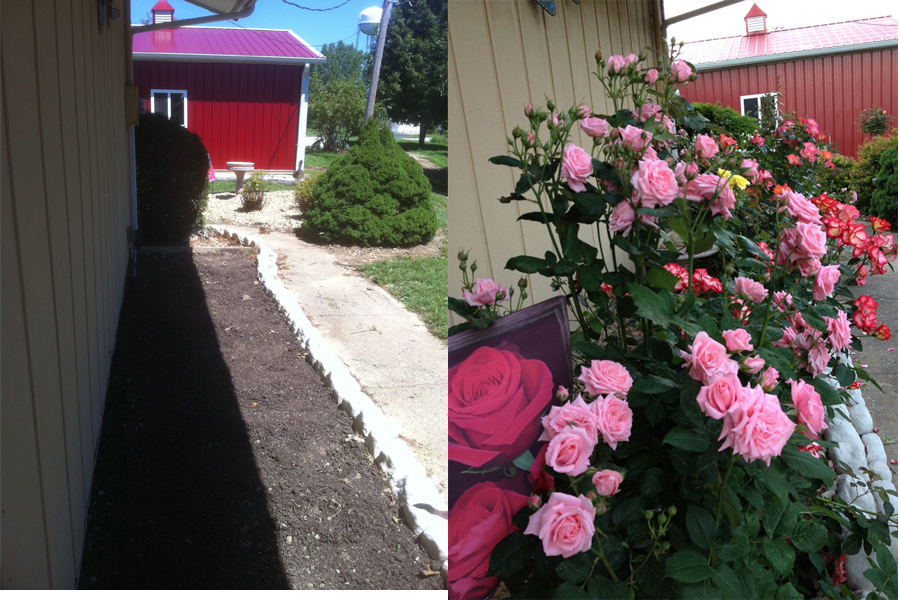 There are many reasons to start over; a new job, starting a career, or to be close to family. You may have a vacation home or want to downsize but still want to garden. We moved back to Illinois because we both grew up in Illinois. Our work situations had provided us with the opportunity to travel extensively to every state in the union. During my husband’s travel he decided he loved Illinois and there’s no place on earth he would rather be. A corporate transfer for me from Chicago to New York City, then Plano, Texas resulted in building a home in Plano, Texas in 1987 and acquiring over 200 roses by 2011. In 2011 we decided at that point we had acquired the house in Central Illinois and the house in Plano, Texas and thought rather than keep working all the time to support two homes and that lifestyle we would downsize and start over in Illinois.

You may not go willingly, but once you set your mind to it, the change may be filled with new opportunities. We sold the Texas home and moved to Illinois from Texas in 2011 leaving behind rose gardens that I had invested heart and soul creating. The Illinois property sits on 3 1/2 acres of rolling sandy loam hills, and did not have a single rose. Leaving behind the rose gardens in Plano, Texas (the safest city in America of its size unless you’re my kidnapped lawn decorations) that took 20 years to collect, I wanted to put in a rose garden that would get the quickest results. I decided to put rose gardens in in stages and share it with you dear readers.

That type rose garden that gets quick results is a floribunda rose garden. Floribundas are known for their ability to bear flowers in large clusters and profusion of bloom. Another advantage floribunda roses have is their ability to bloom continually whereas hybrid teas exhibits a bloom cycle every six to seven weeks. Let me give you a little back story here, this Illinois property is located 40 miles from Starbucks and 80 miles from Home Depot. *  So to locate my new roses I thought I would just pull up the list of roses online from a large garden center like I did in the DFW area, order my roses and have them delivered. Now I have come to learn a valuable lesson the hard way, or I would have dug up quite a few roses I probably will never be able to locate again. And also a large segment of the population that want roses like I grow don’t live in large Metro areas.

Now after living in Plano, Texas; a totally consumer centric life style driven by hopping in the car for a 3 minute drive to Starbucks for coffee, Whole Foods, and Central Market type of living to being 15 miles from Walmart I was in culture shock. A friend down the street said his son told him “Susan and Richard are in the witness protection program.” His dad asked him why would he think that? He said “Why else after all the wonderful cities that they’ve lived would they ever move to Ramsey?” Susan what’s your point? They don’t sell potted fancy rose bushes out here either. Can you imagine my shock trying to find a landscape center that sold potted hybrid teas? I called the nearest landscape center 40 miles away and asked if they carried hybrid teas and the answer to my question was “what’s that?”. You see there are trade-offs to my ‘Green Acres’, lifestyle. And I’m not saying starting over is always easy. Nothing worth doing is ever easy, but it has been worth it.

So now you see why when I spotted ‘Gene Boerner’ at Rural King, in September of 2011, I was shocked and nearly shed a tear. They carry primarily  Star Roses ‘KnockOut®’ roses, which I love also but I wanted more than only ‘KnockOuts’®. They had very little selection in hybrid tea or floribunda roses, so to see one ‘Gene Boerner’ which has a stellar reputation and came out in 1968 and is still rated in the ARS* Handbook of Selecting Roses an 8.2 I grabbed it and planted it as the first floribunda in my Illinois floribunda garden.

Who Was ‘Gene Boerner’?

Sometimes Back To Basics Is Best

Soon I realized the remaining roses I wanted were available online. Many folks don’t realize that their garden centers order their roses from growers bare root and get them early in the season and pot them in containers so they leaf out by the time the weather is lovely and spring like when we are ready to shop in the garden centers for our potted roses. Years ago when I first started growing roses all the roses I planted were barefoot that I got from my local Northeast Rose Society. If you haven’t checked out your local rose society please do folks because most members are willing to help you and share their knowledge. When I was new to growing roses, rose society senior members would stop by my house and make sure I had all my questions answered and that was way back when I was in my twenties living along the North Shore of Lake Michigan north of Chicago. What’s important in the roses you get is the grade and how many healthy canes are on the rose bush. Be sure you have at least three healthy canes.

So here are the stages of the first rose garden in Illinois, beginning with Jackson & Perkins ‘Gene Boerner’ then I found their exclusive ‘Kimberlina’, ‘Iceberg’, I planted bare root, ‘Betty Boop’, ‘Playboy’, ‘Sunsprite’ and ‘Rainbow Sorbet’,

Garden Legends, please check out my page on Facebook, are stories about people, plants, & companies and how their passion for creating better, more beautiful, easy to grow plants will live on as a tribute to them by rooting and grounding beautiful plants across the land in the hearts and gardens of people everywhere. Along with Gene Boerner, two of the most notable American Rose Breeders; Bill Warriner often called “the No.1 rose breeder in the United States and Dr. Keith Zary have created the most famous roses today while at Jackson & Perkins.

Another one of the first roses I planted in the Illinois floribunda garden is a rose exclusive to Jackson & Perkins called ‘Kimberlina’ bred by Dr. Keith Zary. Why is this important to you? Because we want you to be successful with the roses you buy and plant. The American Rose Society requested we review some roses in our garden. Here are some of the the roses of the season that are the first to bloom: with a video of ‘Kimberlina’ to show hundreds if not a thousand buds ready to burst into bloom. http://If you want lush candelabras of roses, rapid bloom cycles, and a rose garden to enjoy for color and the joy of being in your own rose garden you want floribundas.

*If you haven’t checked out the American Rose Society, current President of the American Rose Society, Pat Shanley believes in sustainable rose gardening and is dedicated to every aspect to growing better roses. She also oversees the magazine the “American Rose” magazine, along with Executive Director, Laura Seabaugh. This magazine is completely dedicated to promoting gardening, education, preservation and appreciation of the rose. The American Rose Society is one of the few societies left that continues to publish a print publication 6 times a year along with several newsletters/bulletins and provides each member with a “Handbook for Selecting Roses” and “Creating a Beautiful Rose Garden” booklet.
Former president & rose education advocate Jolene Adams believes that the only way to dispel the myth that roses are difficult to grow is rose growing education. The American Rose Society is dedicated to providing you the gardener with education on how to grow better roses. If you haven’t check them out. Rosarians are standing by to answer your questions. Rose.org