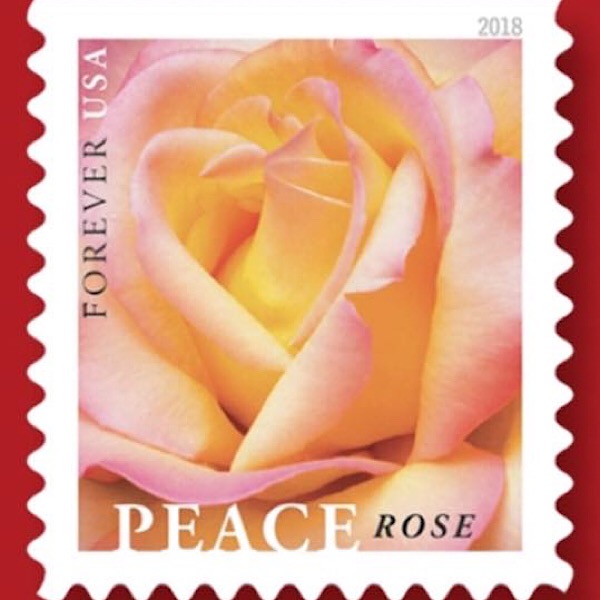 Guest Post by Dr. Charold Baer of the Portland Rose Society; the story of how her husband Rich Baer’s photo of the ‘Peace’ Rose was selected to be the ultimate USPS symbol of love & celebrate the birthday of the world’s best selling, most popular rose.

When you have completed a specific task, or project, do you ever wonder if it was good enough? Was it the best you could do? Did you give it your whole heart and soul? Was it a reflection of your inner passion? Did it stimulate anyone? Was it worthwhile? Certainly we have all had those doubts about our efforts, particularly when they involve our creativity, or our art. Such is the case with the talented rose photographer who lives in our house.

‘Takes One To Know One’ Says the Mr. to His Mrs

Rich is precise and very picky when he is photographing a particular rose specimen, or any rose specimen for that matter. He says that he inherited that trait from living with a perfectionist for fifty years. (What? I guess that I better figure exactly who he thinks he has been living with for most of his adult life.) He frequently spends hours just deciding when to photograph a rose to capture it at its peak performance and then he grooms it so that it would out do any average queen of show rose. Of course, the lighting has to be just right, so there be even another delay. It has always been an interesting time consuming process. However, the process is certainly much easier these days since digital cameras became the rage. He used to take 40-50 slides of a single shot with varying apertures to get exactly what he wanted. Now, he shoots the picture, checks it out and either keeps or discards it based on what he sees and wants. At least with digital it does not cost 75 cents for every image that gets rejected, so taking several shots is still the norm.

The Peace Rose Image Selected , obviously the process has worked for him. His rose photographs have been enjoyed by others for more than 40 years. He has 47 American Rose magazine covers; over 3000 photos in articles, catalogues, newspapers and text books; note cards; and calendars. His photographs have assisted several local and national organizations in their fund raising endeavors, including the Davis Center at Fellows Riverside Garden in Youngstown, Ohio.

Why do Four Year Olds Have ’65 Roses’ aka Cystic Fibrosis?

Tom Carruth, rose hybridizer hero got on the horn and changed history

About a year and a half ago, Tom Carruth, previously a very successful hybridizer for Weeks Roses and currently the Curator of the Huntington Garden, received a call from the United States Post Office. They wanted to produce a commemorative stamp of the Peace rose. They asked Tom if he had any good photographs of the Peace rose. He responded that he did not, but that he knew of someone who had many of them. The Post Office official called Rich and asked for several images from which to choose. The photograph of the Peace rose that appears on one of the Portland Rose Societyâ€™s note cards has always been a favorite of ours. Thus, that photo plus several others were sent to the individual. Months later, the individual contacted Rich to let him know that they had made their selection and it would become the commemorative Peace* rose stamp. The photo that they selected was our favorite, but they chose to only use the inner part of the rose. Even with the diminished image, the commemorative stamp is quite striking. The major problem was that they did not know when it would be issued and everything had to be kept confidential until that was determined.

A few weeks ago, Rich heard from the American Rose Society that they were going to have a ceremony announcing the issuing of the commemorative Peace rose stamp on April 29th. Rich immediately checked on the Post Office web site and found that indeed, the Peace rose commemorative stamp was there and would be issued in 2018. It is, of course, a forever stamp so you can buy a ton of them, which we will definitely do when they are available.

So, even though the artist in Rich continues to ask the questions regarding the quality of his work, it seems that they have been answered one more time and this time with an official â€œstampâ€ of approval! ~ Mrs. Charold Baer