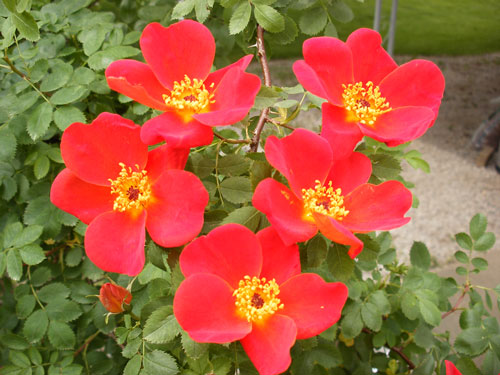 Memory triggers fascinate me, especially fragrance triggers. Have you ever caught the whisper of a fragrance on the wind and been taken back in time? Last night Dr. Tony Liberta, retired biology professor from the State of Illinois University at Normal did a presentation at the Stephen F. Decatur Rose Society meeting in Decatur, Illinois. Old Garden Roses (OGRâ€™s) are defined by the American Rose Society as a variety classified as belonging to one of the 23 rose classes in existence prior to 1867, which he likes to call Antique Roses. His presentation magically swept me back in time to Beach Park in northern Illinois and to thoughts of a little pink Old Garden Rose. I realized last night that I loved that little rose. I think about it often and fondly.

We lived off of Beach Road on a dead end street one mile from Lake Michigan. Can you imagine a street where the trees formed an arbor like a cathedral when you look up? That was Beach Road. I see Beach Road now through my mother’s eyes having grown up in West Texas. Sand storms and cotton, hot, dry, West Texas. Now they might say, oil baby, oil. She used to say to me “Suzy, it’s a lot easier to get warm than cool off!” This was sacrilege. She was a Texan, born and raised and she liked Illinois better. She didn’t like the heat, period. I may have mentioned this but it bears repeating. When I was transferred to Texas I asked Mother to come with me. Her reply was classic. “I got out of there once.” At any rate I digress. At the entrance of the circle drive Mother planted that little pink rose that bloomed only in the springtime. It could have been R. sericea pteracantha, with the classic 4 petals but I donâ€™t remember it having the beautiful red thorns Dr. Liberta showed us last night, which is a signature of this rose. I wish I knew what it was I would plant one tomorrow. The fragrance was intoxicating.Â

This is a true characteristic of Old Garden Roses. They have the most beautiful intense fragrance. Dr. Liberta described that of course most OGRâ€™s only bloom in the spring.

As hybrid perpetualâ€™s came on the scene in the 1800â€™s, which were repeat blooming roses, OGRâ€™s became less popular. Then modern roses came along and replaced hybrid perpetuals. Isnâ€™t it funny, though that little rose only bloomed in the spring how I then scoffed at why anyone would want it for that reason, now I would love to have that little pink single rose from my childhood. Â

One of the fascinating facts about Dr. Libertaâ€™s presentation is that the origin of many of the yellow roses we have today is an OGR species rose called Rosa foetida and of course it is still grown today. Dr. Liberta said although some OGRâ€™s can be prone to blackspot these roses especially the species roses have survived blackspot and yet thrived for millions of years unlike modern varieties that can be weakened by blackspot.

If you want easy care hereâ€™s a thought Dr. Liberta shared with us, Hybrid Rugosaâ€™s actually are very tough, rugged and resistant to black spot. Here are some varieties he said are good for zone 5A and you can check to see if they are good for your zone before you purchase them. Here are a few places that have Old Garden Roses that Dr. Liberta mentioned and I am familiar with. Of course there are others. I called several of the nurseries below but was only able to locate Nevada at High Country Roses. I spoke to Matt at High Country Roses who offered outstanding customer service. Dr. Liberta had listed High Country Roses on his list and this is my first experience with them so I am very pleased to discover them. 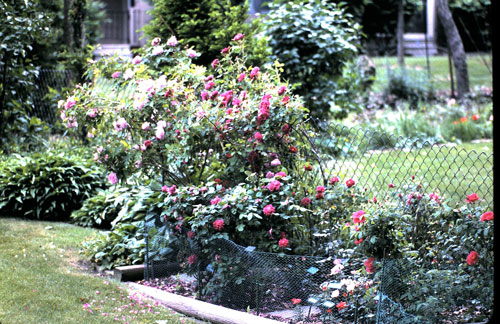 Species ClassÂ  ~ Existed at least 30-40 million years ago only in the Northern Hemisphere. Usually once blooming.

Hybrid Gallica ClassÂ  ~ Popular during the Roman Empire. Fragrant with a diverse array of colors and color patterns. Blooms once in the spring.

Hybrid Perpetual Class: Blooms are produced most abundantly in the spring, and then sparsely the remainder of the growing season. They were most popular in the early 1900â€™

Damask Class ~ An ancient group of roses popular with the Roman Empire for their whose intense fragrance.

Bourbon Class ~ The pedigree of this group is complex. And growth may be either bush like or climbing. Some varieties need winter protection.

Hybrid Rugosa Class (Classic Shrub) Easily identified by the thick, tough heavily veined leaves. Bloom all season and are resistant to fungal disease. Produce colorful foliage and hips in the autumn. Varieties range in size from medium to tall.