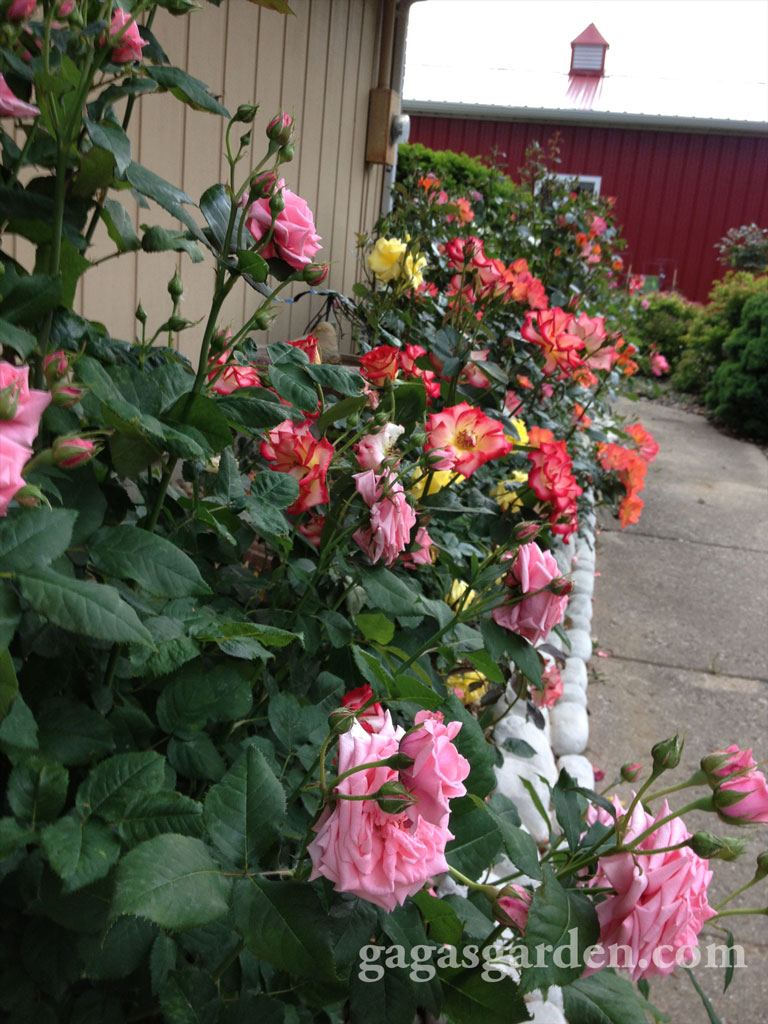 June was declared National Rose Month by Ronald Reagan in 1986. Don Ballin, past president of the Northeastern Illinois Rose Society was the President of the American Rose Society at the time.Â  I was a member of the Northeastern Illinois Rose Society then. We were all so honored to play a small role in that historic moment when the rose was named the national flower and Don was there with the President. Pictured below with President Reagan is Don Ballin (far right) when he signed the legislation.

Across the nation there are rose shows and gardens open that you can take your family and enjoy the beauty of the first bloom all through the month of June and of course the entire summer.Â  I encourage you to go to the gardens across the country. Here’s just a few of the blooms that are spectacular in the garden this week. It’s been a cool & wet spring in S. Central Illinois but it is still a breathtaking first cycle of bloom.

In 1985, the United States Senate passed a resolution asking the president to declare the rose as the national floral emblem. On November 20th, 1986, then president Ronald Reagan signed a proclamation certifying the rose as the national flower in a ceremony at the White House Rose Garden. The National Rose Garden is committed to honoring this national symbol as a reflection of our broader landscape.

To read the declarations in full, please view below:

Americans have always loved the flowers with which God decorates our land. More often than any other flower, we hold the rose dear as the symbol of life and love and devotion, of beauty and eternity. For the love of man and woman, for the love of mankind and God, for the love of country, Americans who would speak the language of the heart do so with a rose.

We see proofs of this everywhere. The study of fossils reveals that the rose has existed in America for age upon age. We have always cultivated roses in our gardens. Our first President, George Washington, bred roses, and a variety he named after his mother is still grown today. The White House itself boasts a beautiful Rose Garden. We grow roses in all our fifty States. We find roses throughout our art, music, and literature. We decorate our celebrations and parades with roses. Most of all, we present roses to those we love, and we lavish them on our altars, our civil shrines, and the final resting places of our honored dead.

The American people have long held a special place in their hearts for roses. Let us continue to cherish them, to honor the love and devotion they represent, and to bestow them on all we love just as God has bestowed them on us.

The Congress, by Senate Joint Resolution 159 [Pub.L. 99.449, Oct. 7, 1986, 100 Stat. 1128, which enacted this section], has designated the rose as the National Floral Emblem of the United States and authorized and requested the President to issue a proclamation declaring this fact.

IN WITNESS WHEREOF, I have hereunto set my hand this twentieth day of November, in the year of our Lord nineteen hundred and eighty-six, and of the Independence of the United States of America the two hundred and eleventh.

2 thoughts on “Love Planted A Rose”