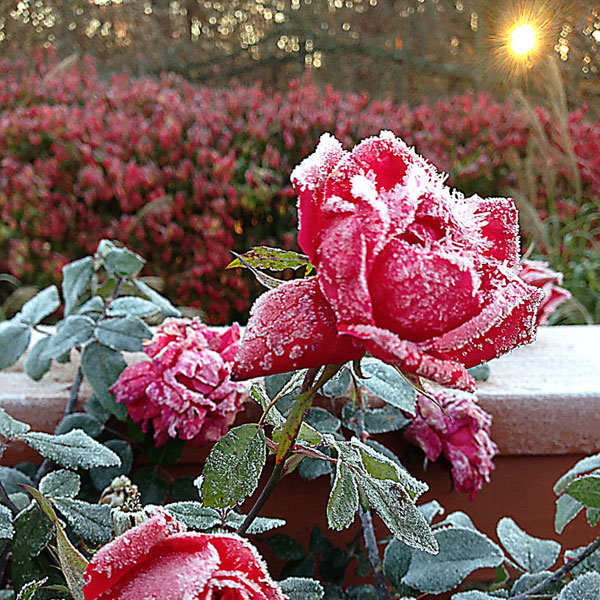 Seasons change and so do ‘Oui.”Do you seek permission to do something you want to do? Or get permission not to do something that you think you aught to do?* I do. Hold on to your bags of mulch! From ‘my lips to God’s ear’ I got permission from a higher authority not to cover my roses this winter! Maybe not directly from God but it was an answered prayer not to do something I didn’t want to do that I thought I aught to from a higher authority than me, William Radler, developer of the popular Knock Out® shrub roses. I had the extraordinary good fortune to visit with Will Radler at the American Rose Society Fall Convention in Syracuse, New York while I was there as a guest speaker on photography. Will “gave me permission” to not cover my roses this winter. Mr. Fox aka ‘Big Daddy’ is my witness. So I’m not going to cover them. No extra mulch, no leaves, no piles of dirt. Don’t send me cards and letters Minnesota Rose Gardener, Jack Falker. Here’s what Will Radler says:

Let me tell you why I am not covering my roses. It’s a test to see how much difference it actually makes in how the roses fair. And this season after the Chicago Flower & Garden Show removing 50 bags of mulch and clearing the garden was just a crazy amount of work. I’ll report to you how the roses fair covered versus uncovered after a Central Illinois zone 6b winter.