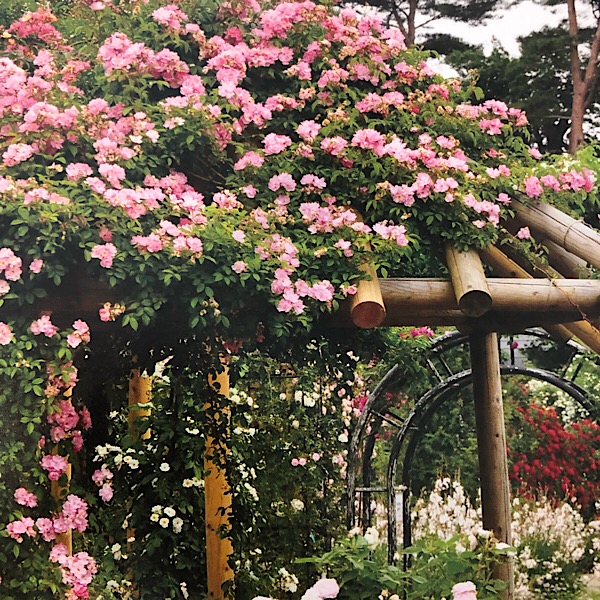 A friendship forged by roses & the written word

This article is about a friendship that spans across the globe connecting hearts and minds by roses. This year’s Akira Ogawa’s package included ‘The City of Sakura’ 2019 Calendar with a rose mystery. Perhaps Meilland International can identify the ‘Mystery Rose’ of the Hotta Estate. Past President, Jolene Adams was editor of the American Rose Society American Rose Magazine when she explained she would invite authors from around the globe to contribute in-depth stories educating readers about their history and country’s experience with roses. Akira and I have exchanged calendars ever since I shared how much his story of the Rose Garden of Fukushima meant to me.

‘The Rose Garden of Sakura City’

The Mystery Rose of the Hotta Estate

“In the estate of the Hotta Family in Sakura City, there is a rose which has been giving beautiful flowers for more than a century in front of the mausoleum holding the bones of the heads of the Family. It is said that the eleventh head of the family, Masatsune Hotta, obtained this rose when he visited Europe, and planted it in his estate.

Unfortunately, though we have been continuing our effort to identify this rose, we have not yet been able to specify its correct name. We consider it is a rose raised in France during the latter half of the 19th century, and suspect that it might be a variety which existed in Europe in those days, but has been lost there, and now can only be seen in this distant island country in the Far East. We tentatively named this romantic rose ‘The Mystery Rose in the Hotta Estate’.

We are now planting this ‘Mystery Rose’ along several streets of Sakura City, dreaming of the days when the city is painted in the colour of this beautiful rose before extending to other cities in Japan.

During the Edo Period (1603 – 1867), the  Hotta Family showed its  presence as a family of senior councilors of the Tokugawa Shogunate. The ninth head Masayoshi is widely known as the important government official who negotiated with the American ConsulÂ· General Townsend Harris toward the end of the Edo Period.

May The ‘Mystery Rose’ Live On & Thrive

The above-mentioned head, Masatsune, is the grandson of Masayoshi, and from 19l0s to 1930s, successively held jobs such as the President of the Japan Agricultural Association and the Imperial Navy Undersecretary.

‘The Mystery Rose in the Hotta Estate’ Description:

This section, displaying the collection of fragrant roses, features a peaceful landscape created by the pale colors of oldÂ·fashioned roses. The rose on the near side is ‘Constance Spry’.

January: The Entrance to the Old Rose Section

The flowers of old roses decorate the screen and welcome visitors.

On the near side:’Pink Iceberg’; the white rose on the right: ‘Nonoka’ ( wild field flowers); on the scree n: ‘Louise Odier’.

February:    Gallica Roses in The History of Roses Section

On the near side (left): ‘Complicata ‘; on the right: ‘Cardinal de Richelieu’

The feature of this section is the large, pastel-coloured flowers of Tea Roses.

April:    The History of Roses Section

This is the scene which comes into your sight when you enter the garden from the camping ground in the park.

May:   The Chinese Rose Section

This section displays old garden roses originating in China, sent from the ZhunÂ·an Rose Garden in China. Many of them give gorgeous double flowers. Dark pink flowers in the center : ‘TianÂ·nuÂ·guan’ (meaning “heavenly maiden’s crown”

Toward the end of May, the pergola is entirely covered with single white flowers.  In autumn, they turn into red hips, dressing it up gorgeously.

In this collection of yellow roses, flowers with different shades of yellow, from cream to orange, display their unique beauty.

Let’s take a rest for a while, surrounded by white and pink old garden roses, enjoying a sense of serenity you cannot find anywhere else.

This is the section where roses donated by Mrs. Helga Brichet are planted. The creamy flowered rose is ‘Andre Brichet’,  named after her husband.  As they open, the  flowers are tinged with pink, changing their expressions little by little.

This is the section which collects roses which do not mind a shady environment so much. On top of the  pergola: ‘Rush’; under the roof. ‘Pompon Blanc Parfait’; left: ‘Prosperity’

November:      The Section for Roses of Japanese Origin

This is the section where wild roses native to Japan and their hybrids are collected.

In  autumn, their red hips shine against the blue sky. The photo: hips of a variety of R.multi.iora.

Early in May, gorgeous flowers of a Tea Rose from Qing Yuan Xiang (China) stand out against the R. banksiae in full bloom.