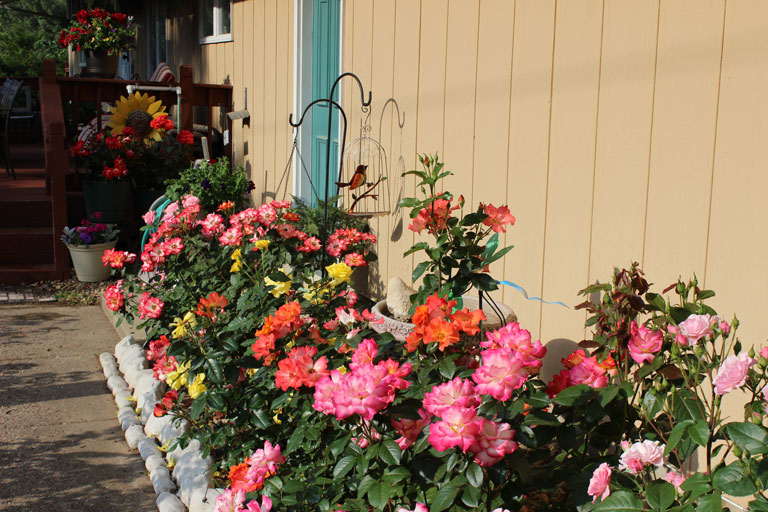 â€œLove planted a rose and the world turned sweet ” ~

June was declared National Rose Month by Ronald Reagan in 1986.

The NationalÂ Flower In 1985, the United States Senate passed a resolution asking the president to declare the rose as the national floral emblem. On November 20th, 1986, then president Ronald Reagan signed a proclamation certifying the rose as the national flower in a ceremony at the White House Rose Garden. The National Rose Garden is committed to honoring this national symbol as a reflection of our broader landscape. (Image: American Rose Society)

Â Biltmore Rose Trials ‘Miracle On The Hudson’ by Robert Neal Rippetoe | Best Shrub | Most Disease Resistant | Best Growth Habit | Best Overall Winner | May 24, 2014. I was a judge at the International #BiltmoreRose Trails at the Biltmore Estate last week-end in Ashville, NC. Paul Zimmerman author of Everday Roses and Consultant to the Biltmore Estate conducts the Trials along with Lucas Jack and his Team each year.

Across the nation there are rose shows and gardens open that you can take your family and enjoy the beauty of the first bloom all through the month of June and of course the entire summer.Â  I encourage you to go to the gardens across the country. Here’s just a few of the blooms that are spectacular in the garden this week. It’s been a cool & wet spring in Central Illinois but it is still a breathtaking first cycle of bloom.

FUN FACT 1: The White House is celebrating the 100th anniversary of the Rose Garden this year. In 1913 Ellen Wilson, wife of President Woodrow Wilson, replaced a colonial garden established by First Lady Edith Roosevelt in 1902.

FUN FACT 2: In 1986 President Ronald Reagan signed Proclamation 5574, which made the rose the National Floral Emblem. The document contained these words: â€œMore often than any other flower, we hold the rose dear as the symbol of life and love and devotion, of beauty and eternity.â€

FUN FACT 3: Roses are the official flower of the District of Columbia, as well as the states of Georgia, Iowa, New York and North Dakota.

FUN FACT 5: The rose is the favorite flower of 85 percent of Americans.

FUN FACT 6: Thousands of songs have been sung about roses, including, â€œRed Roses for a Blue Lady,â€ â€œRamblinâ€™ Rose,â€ â€œMy Wild Irish Rose,â€ â€œEverythingâ€™s Cominâ€™ Up Roses,â€ â€œYellow Rose of Texas,â€ â€œDays of Wine and Roses,â€ and, of course, â€œMama Liked the Roses,â€ a song recorded by Elvis Presley in 1969.

FUN FACT 7: A fossilized imprint of a rose was discovered in Florissant, CO. Its estimated age: about 40 million years old.

FUN FACT 8: In Indiana, the fourth week of June has been designated as â€œA Rose for Friendship Week.â€

FUN FACT 9: William Shakespeare referred to roses more than 50 times, including, â€œA rose by any other name would smell as sweet.â€

FUN FACT 10: The War of the Roses was a face-off between two families who wanted to control England: The House of Lancaster, which used a red rose on its family crest, and the House of York, whose symbol was a white rose.

FUN FACT 11: The Tournament of Roses began in 1890 as a festival. In 1902, a football game was added for entertainment.

FUN FACT 12: Red roses became the official flower of the Kentucky Derby in 1904. The phrase â€œRun for the Rosesâ€ was first used in 1925.

THE NATIONAL ROSE GARDEN
HONORING THE AMERICAN LANDSCAPE
The NationalÂ Flower
In 1985, the United States Senate passed a resolution asking the president to declare the rose as the national floral emblem. On November 20th, 1986, then president Ronald Reagan signed a proclamation certifying the rose as the national flower in a ceremony at the White House Rose Garden. The National Rose Garden is committed to honoring this national symbol as a reflection of our broader landscape.
President Ronald Reagan signing Proclamation 5574, November 20, 1986

UNITED STATES SENATE RESOLUTION The flower commonly known as the rose is designated and adopted as the national floral emblem of the United States of America, and the President of the United States is authorized and requested to declare such fact by proclamation.Title 36, Chapter 10, Â§187
United States CodeÂ Proclamation No. 5574. The Rose Proclaimed the National
Floral Emblem of the United States of AmericaProc. No. 5574. Nov. 20, 1986, 51 F.R. 42197, provided:
Americans have always loved the flowers with which God decorates our land. More often than any other flower, we hold the rose dear as the symbol of life and love and devotion, of beauty and eternity. For the love of man and woman, for the love of mankind and God, for the love of country, Americans who would speak the language of the heart do so with a rose.
We see proofs of this everywhere. The study of fossils reveals that the rose has existed in America for age upon age. We have always cultivated roses in our gardens. Our first President, George Washington, bred roses, and a variety he named after his mother is still grown today. The White House itself boasts a beautiful Rose Garden. We grow roses in all our fifty States. We find roses throughout our art, music, and literature. We decorate our celebrations and parades with roses. Most of all, we present roses to those we love, and we lavish them on our altars, our civil shrines, and the final resting places of our honored dead.
The American people have long held a special place in their hearts for roses. Let us continue to cherish them, to honor the love and devotion they represent, and to bestow them on all we love just as God has bestowed them on us.
The Congress, by Senate Joint Resolution 159 [Pub.L. 99.449, Oct. 7, 1986, 100 Stat. 1128, which enacted this section], has designated the rose as the National Floral Emblem of the United States and authorized and requested the President to issue a proclamation declaring this fact.
NOW, THEREFORE, I, RONALD REAGAN, President of the United States of America, do hereby proclaim the rose as the National Floral Emblem of the United States of America.
IN WITNESS WHEREOF, I have hereunto set my hand this twentieth day of November, in the year of our Lord nineteen hundred and eighty-six, and of the Independence of the United States of America the two hundred and eleventh.
RONALD REAGAN